Here in England, we drink a great deal of tea. It’s drunk throughout the day by much of the population.

According to the UK Tea and Infusions Association, the British consume 165 Million cups of tea a day (60.2 billion cups a year). By comparison, 70 million cups of coffee are consumed daily in the UK.

The title of World champion tea drinkers (by head-of-population that is) goes to the Republic of Ireland. Great Britain is the 2nd largest consumer of tea.

The largest producer of tea is China with an annual production of about 2.2 Million tonnes, with India next, producing just about half that amount.

As tea is drunk so much here in the UK you would think we would know all about it. Judging from my own lack of knowledge that isn’t so. For example, tea – Camellia Sinensis from which tea is obtained- is a small tree*, not a bush as we would have thought. And, it’s so rigorously trimmed by plucking the leaves it could almost be considered a Bonsai ( though, unlike bonsai no root trimming takes place). 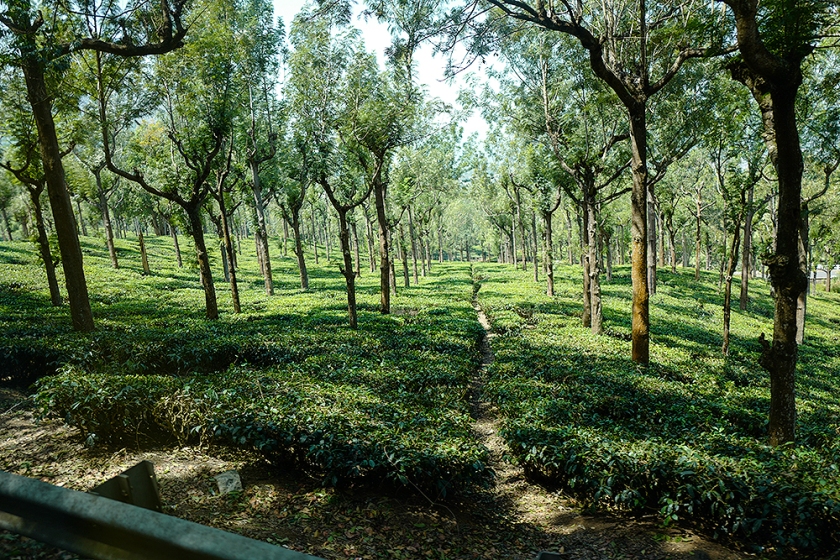 Whilst in India we made a visit to a tea plantation high up in the Nilgiris Hills at Coonoor. Up here at around 6000ft above sea level, the air is cooler than on the plains below. As you climb up to the hill stations the landscape is full of plantations. The land looks for all the world like it’s been cultivated by mad English gardeners who have lovingly tended and trimmed their privet hedges ( that shrub so beloved of the English). Between the rows of the growing tea, tall trees are planted to provide shade from the strong sun. The overall appearance of a tea plantation is one of heavy cultivation. There’s nothing natural about this landscape, apart, that is, from the steep slopes of the vertiginous terrain. 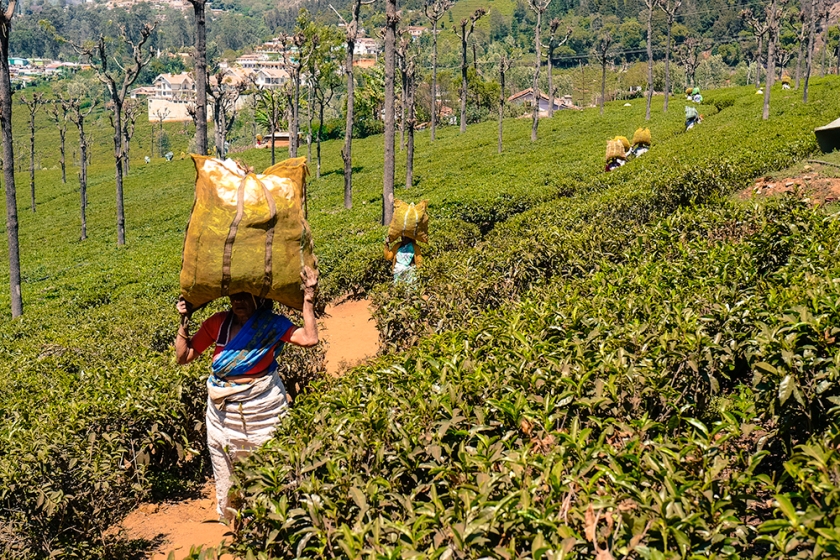 Those steep slopes are difficult to walk up even without carrying the 25kg bags of leaves the pickers carry on their heads. The air is less dense at these altitudes making breathing a struggle, particularly for those of us who live in the dense air at sea level. Watching the tea workers you cannot help but admire their strength and stamina.

However, we haven’t picked the tea yet. How is that done? That depends on to whom you listen. The owners of the more “tourist” type plantations would have you believe it’s all picked by hand. However, when I spoke to a plantation owner who was at a friends house we were visiting he told me that was very much “for the tourists”. Apart from the ‘white tea’ – the new, fresh leaves which are hand-picked which reflects in the price – most tea on large plantations is picked with something akin to a hedge trimmer with a collecting basket. That perhaps explains why we were not allowed to see the actual picking process on the estate we visited.

Nevertheless, everything else seemed to have a heavy reliance on human effort. 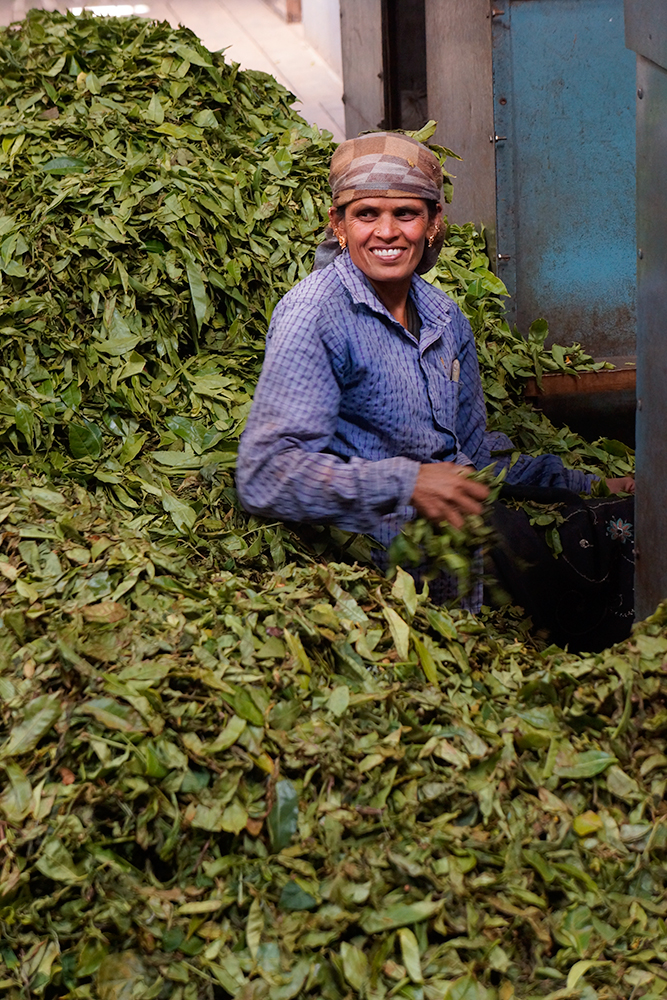 I don’t know why, but I was surprised at the size of the tea leaves 50mm – 100mm long. You can get some idea of the size in the picture above, where the leaves are being made ready for drying. I expected them to be smaller. 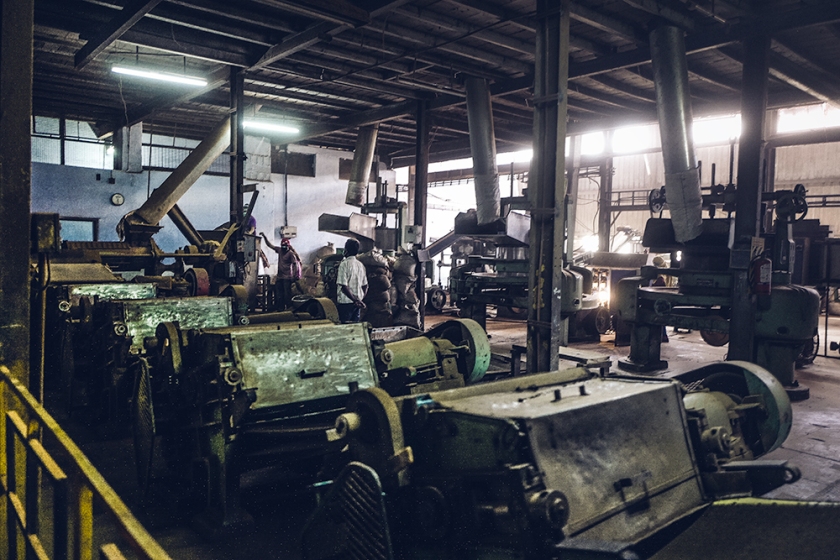 Tea is processed in factories on the plantations. Initially, the picked leaves are left to wither in the warm air of the factory. This process lasts anything up to 16 hours, after which the withered leaf is broken by machine. Tea which is to go for quick brewing use, tea bags etc., is processed in machines which Cut Tear and Curl (CTC machines). Other leaves are simply rolled. Either way, the leaves are laid out on trays for up to 4 hours to oxidise during which time they turn a golden brown colour.

After oxidisation, the leaf is passed through dryers or heating chambers where the moisture is removed and the leaf turns the familiar dark brown or black colour we all know. After this process, the hot, dry tea is sifted through mesh screens and sold through brokers to the large tea processing companies Tea tasters and blenders are employed to ensure we always get consistency in the finished product.

Speciality teas, like Green tea, Oolong, white tea and compressed tea (bricks of tea made for Chinese and Japanese markets) are processed differently but essentially they all come from the same source.

All of this processing produces a smell in the factory. It reminded me of my childhood. With the use of tea bags, we don’t seem to smell tea today. The smell took me back to the much-used teapots of my youth. Heavily stained, never cleaned, they smelled like tea and that’s the smell which filled the factory.

To get your daily cup of tea to your table takes the work of many people, Some of it hard manual work usually carried out by women who do not get paid much by western standards for their labour. Next time you have a cup of tea think of them and thank them for their efforts.

*There is no connection with the trees which make tea and tea tree oil. Tea tree oil -that’s the New Zealand Tea Tree – Leptospermum scoparium.