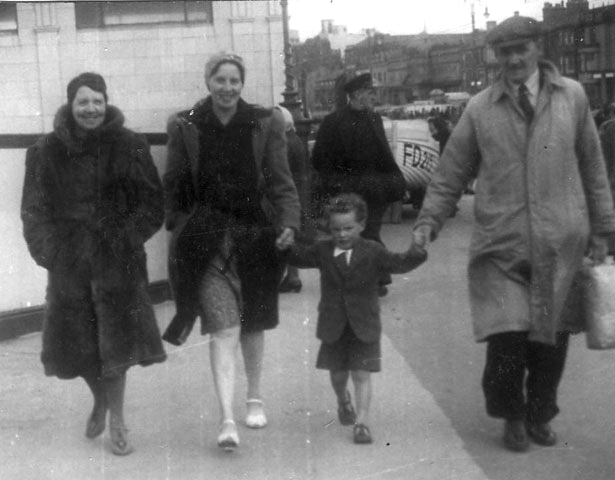 In an e-mail conversation with John Meehan, a founding member, contributor and the editor of the f50 collective, I was rambling on, attempting to explain why I am not a ‘Street Photographer’.   John asked me to flesh  out my view a little and publish, so here it is.

I’ve never been happy calling myself a ‘Street Photographer’. There’s something about the term that makes me shudder – especially when the short form ‘togs’ is used. I’m old enough to remember street photographers at seaside towns and in cities across England.
See the image above. My great Aunt and her family ‘Snapped’ by a street photographer at a seaside resort.

In the days before the ubiquity of the camera, not every household would have one, at least not the working class homes, street photographers would take your picture as you walked along the promenade or stood near an attraction and then would badger you to buy a copy. I remember well my parents batting these away in the 50’s. So I suppose this negative connotation has stuck with me.

And not for me the  vogue for ‘in your face’  type of street work as displayed by Bruce Gilden et al.

A link to a video showing Gilden at work.

He famously says ‘ I have no ethics’. Called by some a ‘Photo Mugger’ in my opinion his style is aggressive often bullying. It doesn’t sit well with my English reserve added to my personal tendency to shyness.

He’s successful and a published Magnum photographer and his type of work has its place. But, if that’s what it takes to be called a street photographer then it’s not for me.

But is this harsh Gilden type picture all there is to Street? No, is the simple answer. It’s just Gilden and his ilk have such a high profile.

In their book ‘Street Photography now‘  Sophie Howarth and Stephen Mclaren  show there is much I could align myself with. Nevertheless, the term Street Photographer still does not sit well with me. So what to do?

Watching a clip recently about the film-maker Jim Jarmusch he used the term Humanist Photographer and even though this is a long form of address much of what he said seemed in line with my view. So I did a little research.

‘Humanist photography is the celebration of life and its inexhaustible diversity as seen through the lens of a photographer. Often called poetic realism, this genre celebrates the ordinary, the small pleasures of life, and the daily pitfalls of our existence.’

I don’t wish to seem highfalutin, though this at first did seem so, when you read on and see just who it is they regard as Humanist Photographers  the list includes Cartier-Bresson, Boubat, Salgado, Brassai, Doisneau etc. you begin to see the attraction.

I’m aware there’s a whiff  of spirituality in the term  (or is it the opposite as humanism  prefers the value of humanity over any doctrine of faith)  but for me it’s not about that.

It’s about picturing the human condition with its beauty and its flaws and in the process attempting to show some poetry in those actions. And along the way trying to introduce the eastern concept of wabi-sabi (the beauty in imperfection) into what I do.

And before you say it… I know. I have a long way to go