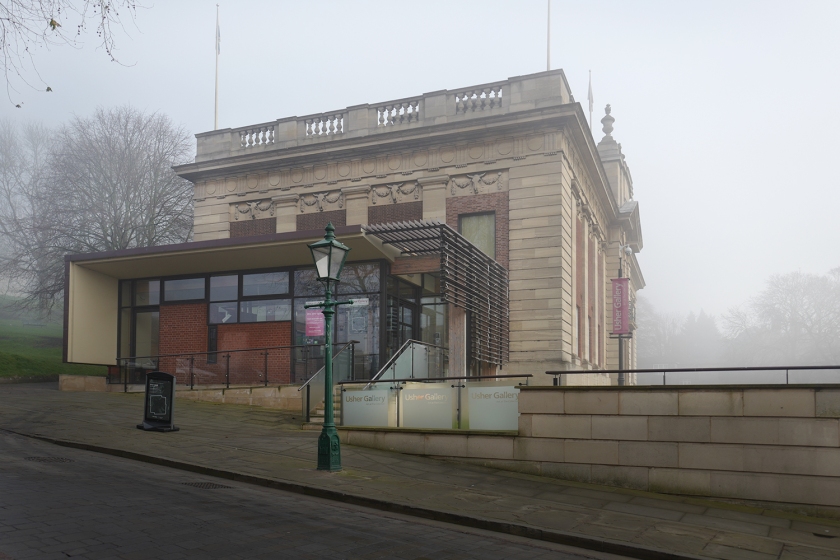 This exhibition by James E Smith comprises 2 parts.
First is Call to Action, a series of black and white photographs from his time in Australia. The images are simply hung.
Second is Half the Battle is Knowing What Sells, a small book shown in the middle of the gallery. This second part of the exhibition is not covered in this review; though, in passing, it comprises e-mails received by Smith concerning briefs given for commercial advertising purposes. You can download the book here free under the creative commons license. Judge for yourself. 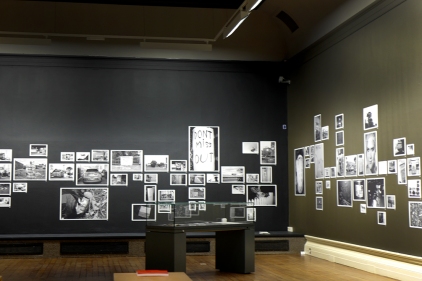 I am from a commercial world and this poses some difficulties in the understanding of “art” per se. In a discussion with a  photographic artist recently (we were talking about an event I had attended the day before which included him and a group of other artists) I wrote:-
“The terms of reference used by artists and those in commerce are more than a little different. The touchstones I have been used to, those of client orientated transactions, profit, efficiency etc were just not present in the discussions you were all having about the analysis of process. And, as I asked, is that the fundamental schism between the arts and commerce? “

So, you can see I am relatively blind as to what pure art, particularly that which relies upon description to be properly appreciated, really means. I confess to being lost in this exhibition. 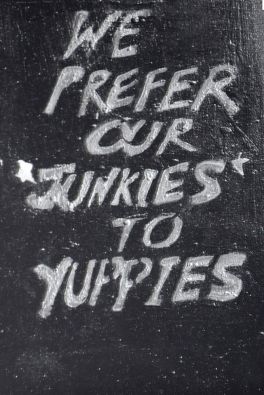 We prefer our Junkies to Yuppies ©James E Smith

I thought at first it was an exhibition of photographs. It isn’t; not in the usual sense at least. To me, it’s more an art installation using photographically produced images as an immersive geometric collage, so to speak, to give a feel, a smell, a flavour, of the “Constantly evolving human-altered landscape” seen by the artist, as the gallery puts it.

Of the many images in this show, there were few, if any, which would stand individually. There were no images which I thought of as elegant, well-formed and with a message. The printing of the images was flat, ordinary, and utterly devoid of appeal. As indeed was the hanging. There was little or no quality on display. Perhaps that’s as intended.

As a group, I could see the worth. The complete works said much about how Smith perceived Australia and Australians.

Smith describes the work as a “disjointed, witty, bizarre and at times disturbing take on what often gets referred to in mainstream media as ‘the current climate’“

For me, disjointed sums it up. As for the rest… I’m obviously an insensitive soul.

You can see here on his website James E Smith is more a fine artist who uses different media to produce his art and his installations, even performances.

Running alongside Smith’s work is a small showing of pictures from the photographic archive of the Lawn Asylum, one of Lincoln’s old mental hospitals dating back to the 1800’s.

Interesting though these images are – touched by the magic of times past – the relevance to Smith’s works was somewhat tenuous, stretching the point too far for me. I saw no connection, not even in juxtaposition.

We should not exhibit pictures of the afflicted, no matter how old the images or whether we know the patient’s names or not. Nor for ‘art’s’ sake. Wrong on so many counts.

You can begin to understand perhaps why I’ve reversed the age old question of – It’s photography but is it art? – as the title of this blog. Or, are those semantic boundaries just too rigid to adequately describe photographic works at all? Art and photography are both broad churches.

I’m guessing my reaction to this show answers the question I have been asking myself for many years. Am I an artist? Clearly, I am not. And, I should stop wrestling with those thoughts and just get on taking pictures. And so should you.

P.S. In a recent interview David Bailey CBE was asked about art and photography. His reply was typically graphic.