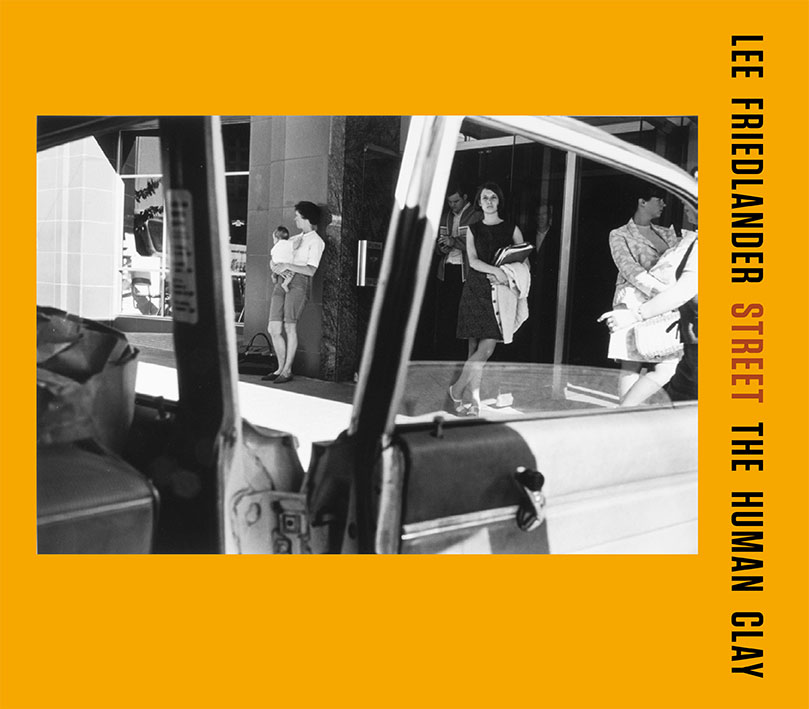 This excellent review by John Meehan kicks off a series  of posts by guest publishers.

Lee Friedlander’s Street The Human Clay is the third in a projected six book series entitled ‘The Human Clay’ published by Yale University Press started in 2015. Each title in the series gathers together images of people grouped thematically. So far we have seen a volume on Children and one of Portraits.

The images in this latest volume Street have again been chosen and sequenced by Friedlander himself. We are told many of the images are being published for the first time. The beautifully printed images are presented one to a page on opposing pages. The emphasis is squarely on the photographs; text being limited to two short quotations preceding the images and two more following. Each pair of quotes being from a song lyric and a literary source.

Establishing a sense of pace and rhythm in the sequencing seems to be Friedlander’s overriding aim. The images jump around chronologically and by location. On one page we might be in his hometown of New York City between 1960-1999 the next we move to Brighton (UK) in 1964, or Rome (Italy) in 1965, or Baltimore, Florida, Chicago, San Francisco, or New Orleans.

This sequencing allows Friedlander to engage in all sorts of fun and games.  His sardonic wit is everywhere. For example, in opposing a 1964 image from London of a street scene with a man carrying a banner proclaiming ‘The End is at Hand’ with a 1970 New Orleans image in which a man with a guitar holds a sign suggesting ‘Time for Prayer’ (p.167-8). In another example, he has a solo keyboard player seeming to accompany the band featured on the opposite page (p.159-60).

All the familiar Friedlander motifs are on show from people in phone booths (inc. Garry Winogrand), window reflections, political rallies, people in hats, his own shadow, etc. The images with Friedlander’s shadow – perhaps his most famous recurring motif – are limited in number. Presumably, the bulk of these images is featured in his volume of portraits.

This gives a clue to the weakness of this series of books. For a fairly hefty price tag per book, you get a retrospective but, of only a narrow range of images. This is of course, consistent with how Friedlander has chosen to publish his work over the years.

However, to appreciate the full range of his work you would need to spend around £250 for all six volumes. For a single volume retrospective, the 2005 MOMA book accompanying his major solo exhibition of that year is the better bet (but, now, also very pricey at around £150.00 late 2016).

There is a sample of spreads at the Yale University press web site here.

You can see other posts by John, including reviews and his own work  on his blog here…