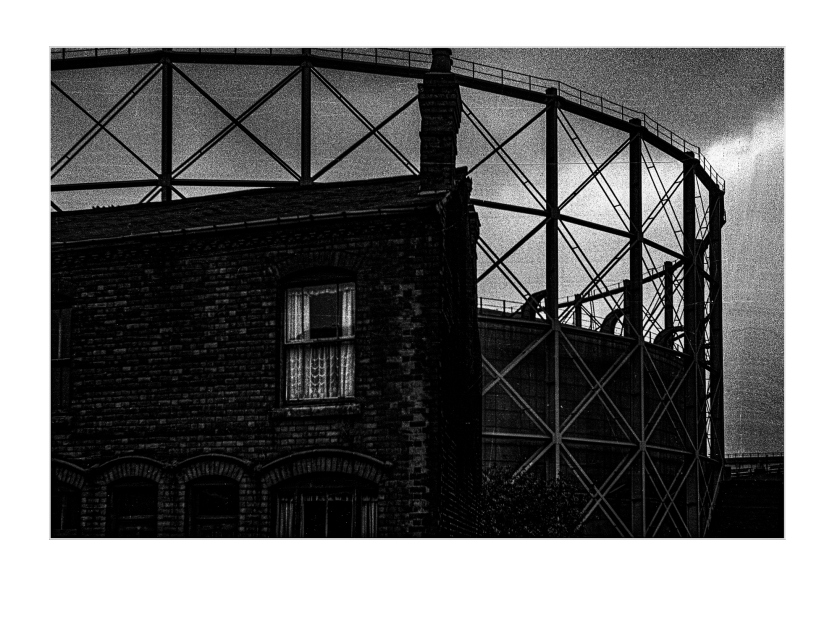 In a conversation I was having with fellow photographer John Meehan over on ‘WhatsApp’ he quoted the phrase “Soot and whitewash” to describe prints using an economy of tones in mono printing.

The conversation started after I  published the image shown above of Saltley Gas Works in Birmingham taken back in the late 60’s – early 70’s. Very reduced tonal scale, very grainy and even scratched. I said it was redolent of the times.

John’s phrase came from a book called “Young Meteors” by Martin Harrison in which he discusses photographers and their styles in the years 1957-1965. The tonal compression style of McCullin, Bulmer et al is dramatic. The images jump off the page.

I wrote in my previous piece on WhatsApp how Saltley, where I was born and lived for a few years, has left a strong impression on me, reflected in this Gas Works shot.

For me *“Soot and Whitewash” has 2 meanings:

*I’ve changed the quote slightly for the title of this piece using “Soot and Distemper” – distemper being another, more arcane word for whitewash which seems far more appropriate relating to my second interpretation of the phrase.

I realise I have carried these early impressions as a ‘preset’ in my head, as it were, for most of my photographic life. I was once described as being from “The Dustbin School” by one critic. He was not far wrong. I deserved it and probably still do.

A few years ago I discovered the work of a Japanese photographer ‘Daido Moriyama’. His work seems the antithesis of what most modern practitioners are searching for – and certainly in contradiction of the camera manufacturers obsession – particularly Fuji etc –  with razor sharp images.

Moriyama’s images are all taken on “Snapshot” cameras –  either film or digital, nearly always originated in colour but made Monochrome and are heavily printed in  (extreme) ‘Soot and Whitewash’ style. They are often blurred by movement. They are out of focus and strongly graphic – influenced no doubt by his early occupation as a graphic designer. In the main he prefers working in the city, in the Shinjuku area of Tokyo in particular, near to his home. People say about his work that sometimes it’s not possible to see what the image is as it is so abstract. Safe to say he is no Ansel Adams. But then ‘Photography’ is a broad church.

Moriyama says he prefers to see his work in books. The books themselves are unstructured. He says you can start anywhere and move anywhere in his books. That’s not to say he doesn’t have gallery shows, he does. Even these gallery shows are unusual. Once he laid out trays of his images and visitors picked whichever images appealed to them which were then bound into books in the gallery, which he duly signed.

Along with work by Brandt and McCullin, who both influenced my early work, Moriyama has now become an influence on my way of seeing – and then capturing and ‘printing’ what I see.

“Of my many books of photographs, Bye, Bye Photography, is closest to my heart. Even now, when I flip through the pages, some thirty years after making it, the book instantly brings back vivid memories of the sixties… Could one give meaning to the meaningless act of printing a simple black and white of a frame that by accident recorded nothing? Perhaps the authority of the failed negative, with all its inherent possibility, could be restored. I imagined I could construct a book – a book of pure sensation without meaning – by shuffling into a harmonious whole a series of childish images…”
(Daido Moriyama)